We seem to find ourselves in a polarised society, with one group of people “pro” and another “against” refugees.  I don’t like to play into the political dichotomy on this issue because I don’t think it much helps anyone. Let me tell you where my heart beats.

The ABC are having a war on food waste at the moment. They are exposing the moral crime that is the gross waste of food in our society. ABC radio interviewed Ronni Kahn on “conversations”, a woman who runs a remarkable organisation that rescues excess food from restaurants and farms and gives it to the poor. She said people are keen to support the organisation because people hate waste. All our mumma’s told us, “don’t waste food”, it’s imprinted in our souls. Well, I have that same passion, but for humans. I don’t like to see humans go to waste. As I see great tracks of refugees cross borders, flee homes carrying their babies, their life and hope for the future, I think “those children could be genius’, they could have the cure for cancer”.

I know we shouldn’t go ‘below the line’ but I just read a Facebook comment by someone complaining how the money that is being spent on refugees could be going to fixing more sick people here. Well ‘Mr’, don’t be surprised when your kid goes to the doctor in 15 years and one of these Syrians will be there with the stethoscope. ‘Mr’ your child has already probably had $150,000 worth of state funded education and untold amount of medical care to bring him to adult hood. These people have had none of that (except what was funded by the Syrian government), but these newly arrived Syrian kids are the hardest working bunch of young people I have ever seen.  Given opportunity they are grasping it with both hands. Sometimes I can’t believe how sorry their nation should be to have lost them and how fortunate we are to have them here.

Just as Ms Kahn scours restaurants farms and supermarkets to find untapped resources, I dream of a world where as nations we scurry to take these precious resources. To seek to have them for ourselves, not to be used as cheap labour, but build into them to become everything they can be.  You see I believe this is how God sees these people. They are not a burden. We live in a world of abundance, feeding these people is not hard. What they need is to be valued for what they are. That is what will bring the gold out in them.

All the tension in our community about refugees got me thinking, maybe culturally we are doing a few things wrong. New refugees don’t want to be isolated, they want to be friends with their new host nation. One of my refugee friends said that he always invites his Aussie neighbour in for something to eat and his neighbour never comes. He told me “he just puts his hand in the air like a salute over the fence”. I informed my friend this is very normal in Australia, that we say “good fences make good neighbours”, and he shouldn’t take it personally. I can tell you his neighbour is missing out on a treat, this particular Syrian is a chef. Maybe we are not doing enough to make these people socially engaged, to teach them things about our culture (like sometimes we just wave, and it’s not rude), and learn some things about their culture, like it is very important just to stop and have a cup of tea or break bread together. Maybe all our fighting and sign waving has made refugees a battleground they never asked to be, we paint them as either permanent victims or potential risk factors, neither is particularly endearing, and maybe the solution is closer to home.

Today, on world refugee day, make a friend, you will change the world. Remember refugees are ordinary people.  It is true that they have suffered, but most of them don’t want to tell you their sad story. They don’t want to be defined as victims and they are the least likely people I know to take any political action. Most of them just want to be seen and acknowledged and build a new life in this strange land. They want to educate their children, get a car, and a licence, find a job, a good mobile plan and build community. They may need help with a form or with purchasing a product with making a phone call. It is not hard work to do, and it is work God is already doing, you will find Him there, among the least, raising them up to be what He created them to be.

If you would like to donate to our work in Lebanon among the Syrian refugees or any of our other projects please click here. 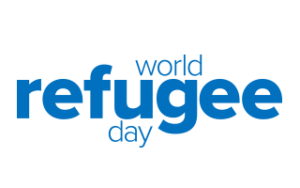