Same is the only “hospital” in the area but it is hardly suitable to be called a hospital by Australian standards. Same Hospital, a two hour road trip from Weberek and the closest hospital to Weberek. The Hospital in Same has very basic equipment consisting of an old sterilisation machine and an examination table that is not adjustable. The hospital bed is very outdated and not height adjustable. The mattress well used (as pictures to the right indicate). The bedside table very rudimentary and old. Hospital facilities of toilets, showers and kitchen again rudimentary and unhygienic. There is little evidence of antiseptics, brushes, towels and other basic hygiene essentials. Same Hospital has electrical power but it’s reliability and consistency of supply are not what they could be. Same Hospital has no xray facilities and no ultrasound machines.

In 2009 a woman from Weberek started to bleed vaginally when she was 7 1/2mths pregnant. After a two hour road trip to Same followed by a 3hr road trip to Maubise hospital where there is an ultrasound machine and operating facilities, the placenta was found to be blocking the birth canal causing the bleeding (placenta praevia) and a caesarean section was performed. Praise God that both Mother and baby survived but had there been equipment at the Wedauberek clinic or Same hospital the problem could have been diagnosed much earlier and the woman transferred to Dili hospital. 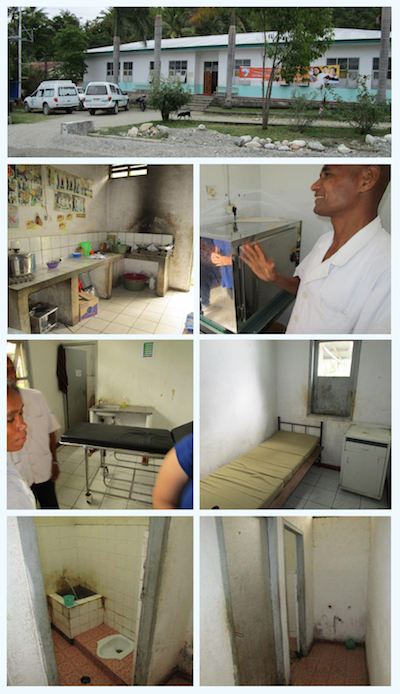 This little beauty had an amazing start to life.  Her mother is the wife of the then chief of Weberek.  When she went into labour the team in Weberek diagnosed the baby was footling breech.  This would mean an emergency cesarian in Australia.  But it is not so easy in Weberek.  Lucinda and the team set off for Same hospital but the labour was advancing rapidly.  On the way the car broke down and they waited on the side of the road for an “ambulance”.  While they waited the baby was delivered by Lucinda and another experienced Timorese birth attendant.  Unfortunately the baby was unresponsive.  Lucinda did mouth to mouth and chest massage for 15 minutes and the baby was still unresponsive.  The group prayed there on the side of the road with the dead little baby and crying mother and the baby came to life. The parents named the baby Lucinda, and as you can see she has grown into a beautiful girl.  As Christians we love a good miracle, but we would rather the people of Timore Leste didn’t have to rely so much on supernatural miracles and would experience more of the medical miracles we have in the west.  We love to see God move but he has given this earth to us and these children are our responsibility, so please help us bring regular miracles to these people with medical technology, science and training.