Since my last news in December, I have returned to Australia. Alina has been blessed with an opportunity to come again to Australia to have a rest, visit friends and share of her work for the Lord in East Timor. We arrived back in Australia on 07 January and Alina will return to Darwin and then East Timor on 09/10 February.

The ship that was due to arrive in the Dili port, East Timor from Melbourne on 8 December with a third of a container of

donated goods including medical items, linen, toys and a new gas fridge for our house in Weberek was delayed. Just prior to our departure from Timor we were advised that the ship had arrived and the contents of the container would be unloaded on 09 January. As the ship had arrived sooner than previously advised, and we were due to fly to Australia, friends from Weberek were able to come to Dili and return with the truck to ensure safe delivery of the donated items to our house in Weberek.

During December and January, prior to returning to Australia, we have been in a process with the Manager, of our larger Central Medical Clinic, Wedauberek (about a 45min drive from Weberek) to prepare a proposal requesting an ambulance for Weberek and an extra ambulance for Wedauberek. Initially I received advice to lodge a proposal requesting the ambulances, with the Administrator of Same, as there would be several reserve ambulances available in Dili and not yet allocated to any districts. Orlando, the Centre Manager of the Wedauberek Clinic suggested that this channel would be unproductive so we are currently in the process of gaining the relevant email addresses to lodge our proposal to a doctor working with the Health Department in Dili. We would very much value prayer for this process.

Wedauberek has one ambulance that is not a 4wd and when this vehicle is out of service there is no replacement vehicle. To date my 4wd is the only vehicle available to transport persons in need of urgent medical attention out of Weberek.

On 29 December Alina & I were called to attend a 17yr male with a severe laceration to his calf muscle after his young brother had hit him with a machete. His tendon was almost completely lacerated. Alina & I transported him to the Wedauberek Clinic where one of the attending doctors was able to repair the tendon and suture the 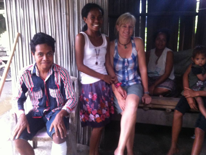 wound. Please pray also for another process that we are currently working through to connect with relevant organisations to have a bore dug to provide water for the Wedauberek Clinic and another bore in Weberek to provide water for the schools in Weberek. Currently clinic staff at Wedauberek are required to collect water from a well in the village and carry to the clinic for patient care.

I will send another update closer to my date of return to East Timor.

Thank you for your ongoing support as we continue to serve our faithful and loving God in East Timor.