Alina & I arrived back in Dili on Monday. On the evening of my arrival back in Weberek on Sunday 26 October, we went to use the vehicle again in the evening and both the headlights stopped working and there was smoke coming from melted wiring leading to the headlights. Two doctors tried to help us with the problem but were unsuccessful. While we were at the house trying to resolve the headlight problem a man from the village came to notify us that his daughter in law had come to Weberek and was in labour. She was due to have her first baby. The two doctors went off to assess the lady and Alina & I asked one of the past government nurses who has some mechanical experience to have a look at the vehicle. He was able to use other wire to temporarily repair a fuse giving us one headlight. Unfortunately the repair of the fuse didn’t last long before the wiring problem burnt out the fuse completely and more wiring. Praise God that we were not on the road travelling when this happened. 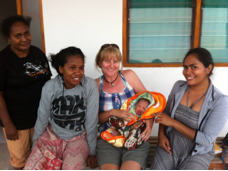 That night the young woman in labour continued to have irregular contractions. She had been vomiting and was quite worn out so at about 1230hrs the visiting midwife, Orlinda, from our local larger clinic of Wederberek, the newly posted doctor to Weberek, Franco, and I in consultation and praise God, agreement by the family, decided to transfer her to Wederberek to continue labour. We were praying that the baby would be born before nightfall as we had no headlights and the Wederberek Clinic’s ambulance is currently in Dili for repairs. The delivery was a combined effort with two Timorese midwives, myself and one Timorese doctor, Mateus, who was our doctor in Weberek from October of last year. The new doctors are on a continual rotation which is important for their skills but not so good for the people who had begun to develop rapport with the first doctor and are now having to start afresh with a new doctor. A healthy baby boy was born at 5pm. The parents decided to call him Lucindel after me.

The clinic staff usually like to keep the women at the clinic for at least two hours following birth. They made an exception because they knew that we had no headlights. By the time we reached the bottom of the ridge to ascend the hill into Weberek we had lost daylight and had to drive by torchlight and using the horn regularly to alert motorbikes especially of our approach. Our plan had been to be in Weberek until 13 November when I needed to return to apply for my visa extension but due to the problem with the headlights we returned to Dili on Monday. I have a cold at present so it is a blessing to be able to stay in Dili at present with our Brazilian friends Evilasio & Elizangela in their air-conditioned house,

During this time that we are in Dili we plan to be in contact with the Timor representative of Rotary Australia regarding the donated items that are currently in transit from Melbourne. We have been told that the ship is due to arrive in Timor on 11 December and the donated goods will be available for pick up from a point that Rotary will notify, a week to a week and a half later once the goods have been passed through the customs process. We are also meeting with an Australian couple; a paramedic and neonatal nurse, who are in Timor to assist with the process of repairing and equipping ambulances. We have been told that four ambulances have been allocated for Weberek’s district. There is a process that we need to follow to secure an ambulance for Wederberek and Weberek to share.

et sloppy pig sty inside, each time there is heavy rain in Weberek. Marcus is currently on treatment for tuberculosis again. He had tuberculosis the first time in 2004. He and his family need approximately 5000usd to build a new house and so far Marcus has received 500usd. Please contact me via email if you are able to help Marcus and his family with a monetary gift toward the house. Marta, will probably return to Weberek with us when we return in about one week.