In May 2013 a new medical clinic was built by the government in Weberek. Over a year later there is still no lighting source in the clinic and the water that is now connected to the clinic has been set up through volunteers working with Geoff Steventon from Peak Hill and Parkes NSW. Recently the Parkes & Peakhill volunteers provided the doctor with a light and connections for a small battery that he had purchased himself. There is no electricity in Weberek. The clinic is a large building of mostly empty consult rooms.

While Peak Hill Team have managed to get a water tank and pipeline to the clinic, villagers regular interfering with supply lead to periods of no water availability. There is no power to Weberek village or the hospital and it is unknown if or when that is likely to occur. Generally the clinic is clean but lacks even the basic office, accommodation and medical equipment. There is generally one doctor posted to the clinic although support staff is at this time unreliable. There is a severe shortage of ambulances and support staff. The ambulances stationed elsewhere can be unreliable through lack of staffing, poor maintenance and shortage of tyres, etc. In fact there is generally only one vehicle of any description in Weberek which is owned by Para Marcia staff.

Lucinda’s 1999 Triton is the only vehicle in Weberek and is often used as an ambulance. A second ambulance for the district would reduce mortality rates. There are many deaths that can easily be prevented with more resources and competently trained health professionals. Ambulance drivers in Timor are just that, ambulance drivers and not paramedics. If they were to receive training in medical care and mechanics ambulances would have more on road time and more lives could be saved. 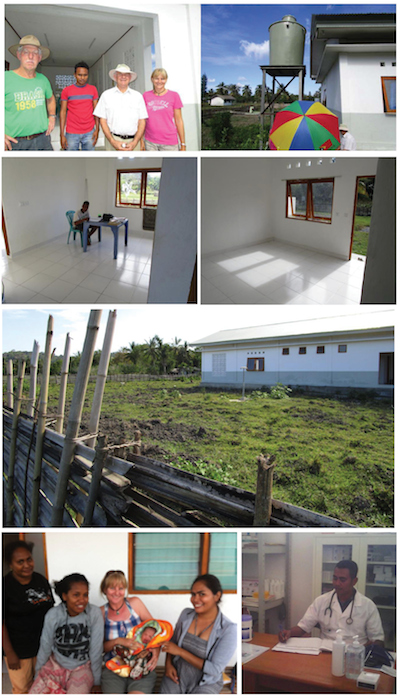 Baby Jonas and the Value of Traditional Birth Attendants.

Baby Jonas was born in September 2015 in Weberek. Expectant Mother’s are being strongly encouraged to give birth in hospitals but there simply would not be enough hospital beds available should women all choose to have their babies in hospitals. Clara, Weberek’s oldest traditional birth attendant assisted in this delivery. Our team arranged for Clara to attend Dr Dan Murphy’s birth attendant course, and consequently she has been equipped with skills to be able to recognize & resolve some complications related to pregnancy, birth and the six week postnatal period following birth. Women in villages in East Timor continue to choose to give birth at home calling mainly on local birth attendants & family members to assist them in childbirth. Giving birth in East Timor in hospitals is very difficult for women who are responsible for taking care of the family’s goats, pigs & chickens. Families the size of 7-12 children are still very common in Timor. Outside of Dili most people grow all their own food and this would mainly be the responsibility of men although many women of school age and older children, also work in the fields. There are very few hospitals in East Timor. The nearest hospital to Weberek is a two hour road trip away.

In August 2009 one of our local birth attendants in Weberek diagnosed a breech position. The woman was already in established labour. Our plan was to meet with an ambulance that had been dispatched from Same hospital. Just 40mins into our drive a baby girl was born bottom first. Clara was able to competently assist me with the delivery in the back of our old Toyota Landcruiser which broke down just as the baby was born. The baby was not breathing and Lucinda performed mouth to mouth resuscitation on the tiny baby for approximately ten minutes before she started to breath. Praise God that this little girl, the daughter of Weberek’s Chief at the time who they named Lucinda, 6yrs later is very healthy and active. Following the birth we waited on the roadside for several hours for the ambulance which was to meet us in transit to Same. The ambulance had also broken down and reached us almost 3hrs later. I was asked to go with the Mother & baby to Same hospital. It was then that I learnt that Ambulance drivers in Timor have not medical skills and there is no medical supplies in the ambulances. The stretcher was the only equipment making it any different other vehicles on the road.

The government do not yet recognize the vital importance of training health workers and traditional birth attendants. In the past I have been told by government health officials that birth attendants should not be delivering babies. Sadly the valuable contribution of Traditional Birth Attendants (TBAs) is not recognized by many Health Professionals in East Timor. Most villages do not have a trained Registered Nurse or Midwife so women have built strong rapport with these TBAs. Timor needs people with administration skills to work alongside the government, creating Health Ministry Approved Health Worker courses and working with the departments to help them recognize the valuable contribution of training programs such as the training program for birth attendants at Dr Dan Murphy’s Clinic in Dili.

The main form of transport for the people is by foot or horseback although as the economy has been improving some families have been able to purchase a small motorbike. Public transport in the regional areas of Timor are small trucks which are not ideal for women close to giving birth. There is currently one ambulance located at Wedauberek, a 45minute drive from Weberek. This one ambulance is expected to cover a radius of about 70kms of mostly very rough roads requiring 4wd access only. Due to the road conditions this one ambulance is often off the road for maintenance.

Weberek’s district, Manufahi is in need of a second ambulance. They need people that can come and train them in vehicle repairs and maintenance. We need people to work in the area of health administration. Often funding and vital medication and other resources are delayed getting to regional clinics and hospitals due to poor management. In recent years we received word that Same Hospital, Weberek’s nearest hospital had run out of gloves and Panadol. 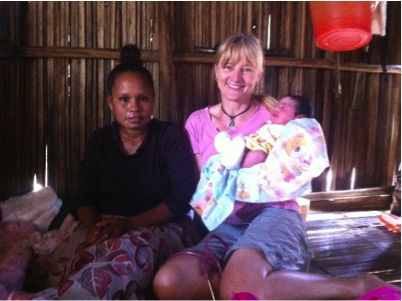